Analyzing the False Dichotomy of AR vs. VR 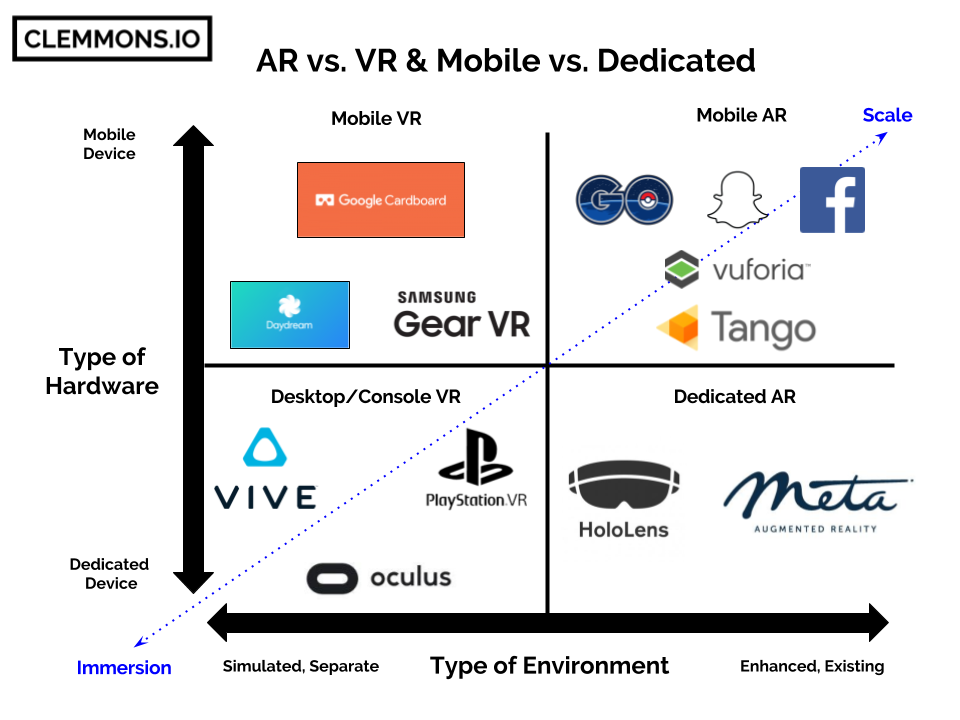 Introduction To the ‘AR Vs. VR’ Debate

The ‘VR vs. AR’ topic has now become a pointless and obsolete argument; a false dichotomy likely started by media or analysts that have no extensive experience as either a consumer or developer in the respective two mediums. Meta’s Gribetz affirmed, during Scoble’s broadcast, the existence of those that merely hypothesize behind closed doors without actually touching the market. It is vital that both communities not let public perception or private interests be driven by such people (although the market itself has already accepted both technologies). Palmer Luckey, Founder of Oculus, has stated that is a “silly semantic and ideological battle”.

Both AR & VR have seen astronomical growth, in terms of both investment and actual revenue, as well as multiple product iterations, within a span of a few years for some of the leading brands. Thus, it doesn’t serve any purpose to present the two fields as though they compete with each other, as they don’t.

Here are my definitions for each field (may be different than those of others):

Virtual Reality: Simulating a separate environment independent of the user’s current environment. Using human vision inside of a digital environment.

Mixed Reality: I personally categorize MR as a further enhanced AR, but with the ability to fully simulate an environment that is attached or related to the user’s current one simultaneously. Using both human and computer vision in a blend of physical and digital environments.

While there are, in fact, some fundamental differences between each medium, it’s important to realize that there are some advantages to each combination of device and environment. To better understand that aspect, let’s look at this chart:

The AR vs. VR debate is centered upon what type of environment the user is exposed to (X-Axis). The real question that should be discussed, however, is what hardware type (Y-Axis) is most ideal: Mobile or Dedicated? This creates a function (blue dotted line); the result of which is balanced somewhere between mass distribution (“scale”) and immersion. Dedicated VR is the most immersive, while dedicated AR & Mobile VR give some immersion, but don’t necessarily have the same hardware requirements, so those sectors will be able to achieve more consumer adoption.

The key with mobile is mass distribution, with countless compatible devices spread across the globe whose owners are potential users. Today, the primary inhibitor to the performance of mobile games and applications are the memory and battery usage. I’ve personally noticed that Snapchat seems to use quite a bit of both on my device, at least. They also need few, if any, extras:

Mobile VR, at the bare minimum, only requires a cardboard headset that can literally be mailed out to users. You can add comfort and a more sophisticated experience with a better headset such as Samsung’s Gear VR, Google’s Daydream, and other mobile virtual reality headsets. These provide more accessibility than their more dedicated counterparts, since these headsets are more affordable and don’t require high-performance PC’s (which only PC gamers would have on hand, anyway).

Mobile AR (Pokemon Go, Snapchat) doesn’t necessarily require users to have any extra equipment. Some games/applications, such as those built with Vuforia, will need paper markers, though. Recently at WWDC, Apple announced their markerless ARKit platform, which is poised to become the world’s largest AR platform, reaching millions of devices.

Desktop and Console (“Dedicated”) VR , on the other hand, have traditionally been the dominant medium for interactive entertainment since the dawn of videogames (yes, it’s spelled as one word, apparently). There’s a sub-debate within this realm of PC vs. Console, which we don’t get into since it strays from the topic of XR. It seems that the two subsets are starting to converge, anyway. Their advantage is computational power and graphical performance. Virtual Reality games and applications, in particular, require dedicated memory usage in order to be ‘immersive’. You can search for more technical descriptions (John Carmack and Michael Abrash give brilliant explanations) in order to improve your understanding, but basically there must be a high frame rate in order for the brain to be tricked. There’s a couple of other aspects to VR development that differ from normal development pertaining to content usage and user experience that would also apply to mobile VR, such as optimizing low-poly assets to reduce the quantity of draw calls.

For the intents and purposes of this article, I’m considering anything that is not a phone as “Dedicated AR”. These include devices such as Microsoft’s Hololens and the Meta Glasses. Some are tethered, some are not. To me, this will likely be the final frontier of immersive reality, based on the potential applications and use cases of the technology.

Hardware cost and content monetization are the two factors holding back both dedicated virtual reality and augmented reality. The cost of some devices is simply too high, and content creators/developers will need distribution to get to the point where they can achieve profit/positive ROI. Facebook and HTC are alleviating this pain by funding certain initiatives.

Mobile AR is currently, and will continue to be, the winner here in terms of scale. Most people already have a mobile device (which is an interesting point in of itself, as it is the first time some regions have had widespread access to computers/internet). One of the reasons soccer (or “football” depending on where you’re from) became such a global phenomenon is because there’s no need for additional equipment (applies to other sports as well). All you really need is open space, a ball, perhaps some goal posts, and of course, people to play with. While there are various smartphone AR technologies out there, such as ARKit, ARCore, Snapchat, & Facebook, some of them don’t necessarily complete with each other.

The dedicated VR headset space is continuing to grow. PlayStation VR has just surpassed over 1 Million devices, likely due to the fact that you only need to purchase a headset, as it’s compatible with the current PS4 hardware. Some still have doubts about VR, claiming that the consumer VR market isn’t large enough or that there aren’t enough devices, and I can’t necessarily blame them. Virtual Reality Arcades are gradually becoming more widespread, particularly in China. This helps users who can’t or don’t want to invest in a dedicated headset (or new computer powerful enough to run VR) by allowing them to still experience VR at a fraction of the cost.

Notice how I didn’t inherently say that augmented reality (or virtual reality) as a whole will win. The dedicated AR devices currently on the market are a bit too expensive for most consumers. There could be, however, some interesting business (B2B) applications for the technology, though, so from a development standpoint, there are other opportunities to generate revenue that are independent of consumer adoption. Comparing AR and VR to each other is a bit like comparing apples and oranges, or even apples and rocks, as they encompass two separate application realms.

One area that I left out is 360 video. I categorize that under VR because it is a separate environment. What’s neat about that is that it doesn’t require as much graphical performance, just actual disk space (depending on the resolution). I also don’t really see the purpose into separating gaming & non-gaming applications this early in the space, so I won’t get into that at this time either.

What do you all think?