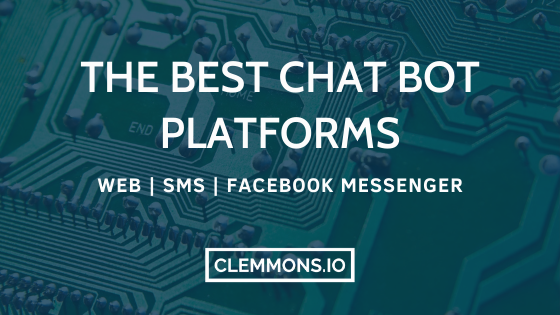 Chat “Bots” are simply automated conversational experiences within either web or social media platforms online. While some chat bot tools might have a degree of technical sophistication, very few chat platforms are reliant on artificial intelligence, and instead must be programmed by human developers.

There may very well be a clear distinction between chat bot software and live chat. That which separates the two types of platforms is slowing going away, however. Some live chat platforms are adding automation rules, and some the bot platforms have a way to transfer new qualified conversations to a live agent. At the end of the day, as long as the experience seems human, or at least conversational, you should see similar results regardless of the type.

ManyChat is by far my personal favorite platform to use for developing chatbots for Facebook Messenger. It was founded in 2015 by Mikael Yang. They went through 500 Startups, and are arguably the best bot platform out on the market.

It has the best user interface for designing and constructing the logic behind the bot, like flows and sequences.

As with any Facebook page, much of the value of the Messenger experience is geared towards local & retail businesses and the agencies that serve them, as you can see in our restaurant chat bot case study.

Manychat has many direct integrations and even more available via Zapier & similar platforms for their API.

Manychat has native SMS & email functionality, which is key for Omnichannel experiences.

They now provide SMS & Email automation from within ManyChat itself, in addition to 3rd-party integrations (direct & via Zapier). This is useful for omnichannel marketing.

Manychat recently added a direct integration with Shopify, which is quite useful for eCommerce store owners and marketers.

ManyChat has various Growth tools, such as comment-to-message and Ref URL’s that can be used to acquire new subscribers. Ref URL’s can be used for a variety of digital and offline channels to grow bot subscribers. For example, since the CtM growth tool wouldn’t function inside of Facebook groups, you could instead post a vanity URL for group members to click on the link.

ChatFuel was among the first Messenger chatbot platforms to offer chat bot templates.

The thing about Mobile Monkey, which was founded by Larry Kim ( Wordstream), is that Larry’s own page had been banned from messaging on Facebook due to a high block rate back in February 2019. Larry also follows a large amount of folks on Twitter.

BotStar is a hybrid & holistic chatbot solution for both websites and Messenger with a centralized inbox.

ItsAlive seems to be both a messenger chatbot platform and a services firm based in Paris, France.

ZenDesk acquired Smooch.io, an omni channel messaging platform, and rebranded it to Sunshine Conversations. They have a Whatsapp Business API.

WhatsApp, which is now owned by Facebook, is a widely popular messaging app across the globe. Businesses can create WhatsApp account as a communication channel for their customers. While there is a WhatsApp Business API, there aren’t yet fully fledged “bots” like you see with ones on Facebook Messenger. Instead, they are currently limited to things like team inboxes, away messages, quick replies (message templates), some automated conversations. Like Messenger, mostly non-promotional messages are what’s allowed.

Sendbee functions as a team inbox & chatbot builder for WhatsApp. As the WhatsApp Business API expands, they have enabled certain automation features for WhatsApp.

Landbot is both a ‘No-Code’ web-based chat bot tool and for WhatsApp as well. They call their offering a “conversational website”.

While Instagram is owned by Facebook; there has been nearly as much capability in Instagram’s direct message system as Facebook Messenger itself. There is, however, now the ability to merge Instagram DM’s into a connected Facebook page’s inbox, which allows incoming messages to be read and replied to from the same place. There are a few “bot” services for Instagram that are able to seemingly operate within the scope of Instagram’s TOS.

Part of Ingramer‘s platform is the ability to manage & broadcast direct messages on Instagram. They also offer a suite of other Instagram tools for researching and analyzing profiles and hashtags.

Many of the use cases for chatbots in eCommerce involve replacing (or augmenting) email sequences with conversational funnels within Facebook Messenger for growing subscribers and increasing the conversation rates of abandoned shopping carts online. A Shopify chatbot is also useful for when Facebook Messenger is enabled as a product distribution channel.

Octane.ai is designed for use with eCommerce (Shopify, in particular). Their Co-founder, Matt Schlicht, runs a TikTok newsletter. Their other co-founder, Ben Parr, is involved with Samasource.

ShopMessage a chat bot tool for ecommerce brands. Their speciality is an abandoned cart sequence delivered within Facebook Messenger.

Recart could be quite useful for messenger marketing in ecommerce, as they integrate with both Shopify and WooCommerce.

Botletter was a Facebook Messenger tool for newsletters and drip campaigns.

JivoChat is primarily marketed as a live chat software for websites, however, it has quite a few automation features that elevate it to chat-bot status in some cases.

Intercom is a web messaging platform for sales, marketing and support teams. It helps create virtual conversation with website visitors. There are quite a few integrations available, making numerous marketing automation recipes possible.

Drift is a web chat tool that’s great for sales.

Exceed allows for conversational email and chats, which is great for B2B sales automation. They describe their chat software as “virtual SDRs”.

Dashly is a conversational software that specializes in web chats.

Botsheets is a CMS for Manychat within Google sheets.